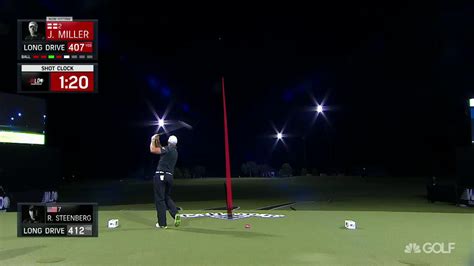 When it comes to swinging fast and hitting the ball far, names like Dustin Johnson, Lexi Thompson and Brooks Koepka come to mind.  When I hear that, however, I have one question that always comes to my mind…

Why are people talking about people who don’t crack 130 mph?

On the World Long Drive, if you swing under 140 mph you aren’t even thought about.  Wouldn’t it make more sense to talk about what the long drive world is doing in relation to increasing club speed?

Don’t get me wrong, DJ, JT and everyone else in the 120+ mph club is quite spectacular and hit the ball a long ways with incredible accuracy.  But if we are going to specifically discuss club head speed, the sport scientist in me would want to study the guys and girls who swing it the fastest in the world.  This is where I came to the conclusion that most golfers have no idea how the two different athletes’ training would differ and where they would be similar. What follows is an attempt to outline three simple differences between PGA/LPGA Tour Players and World Long Drive Competitors.

As a side note, those little guys like Rory and JT who swing it super fast are also attempting to put some size on as well in order to help with resilience to injury.  The reason for this is because they swing it incredibly fast with relatively little mass putting them at a higher risk for injury.

Before we go any farther, I want to make a point that nothing in this article matters if the golfers don’t have the requisite mobility to be able to rotate.  The four main rotary centers of the body for the golf swing are the neck, the shoulders, the thoracic spine and the hips. If you want to see where you stand in these areas, check out At Home Golf Fitness Assessment you can take sitting in your living room.  It is simple and you will know right away if you have areas you need to address if you have limits in these areas.  OK, back to getting bigger.

So why are they trying to get bigger?  The reason is a simple math equation. Power = Force + Speed.  The more force that a golfer can produce increases one of the main components to increase their club head speed.  The more body mass a golfer has, the more force they are going to be able to produce with relatively less effort. For example, a 150 lb golfer will have to move a lot faster to create 130 mph of club speed than a 250 lb golfer.  Think Ernie Els vs Justin Thomas. Silky smooth vs jumping off the ground.

Now don’t mistake big for slow.  These athletes in the long drive world are cycling their training throughout the year and will have periods where they look at putting on some mass, but they also spend a crazy amount of time training their nervous system to be fast.  This is where we come to a second difference.

When it comes to the World Long Drive, these guys and girls train for some incredible power.  Using light bands and many of the exercises you see on the Golf Channel are mostly just warm up, cool down or auxiliary work for these long drive guys and girls.  While Tour players, juniors and most other golfers will also want to train to get faster, the long drive competitor is going to generally take it to another level.

They are going to be training incredibly intense and hitting the nervous system from many different angles.  Most golfers have used medicine balls for throws, bands or cables for some rotary speed work and probably some boxes for jumps and landings.  Long drive competitors are going to do all this plus some form of barbell olympic lifts or pulls and likely some intense sprint training to maximize acceleration and top end speeds.

They are also likely utilizing cycled triphasic routines with post activation potentiation and a heavy focus on eccentric training at different times of the years.  Long drive competitors also work on maximizing their force generation curves and working to maximize the efficiency of their entire system to absorb, transfer and express elastic energy as well as possible.

The long drive golfer is going to spend quite a bit more time in the gym than the PGA/LPGA golf professional because the physical demands of their sports differ.  Both will spend a TON of time working on their sport, but how they work on their sport and the percentage of time they put towards the different elements will vary widely.

Think of the PGA/LPGA golfers we see on TV as 200 meter to 400 meter sprinters.  They need to be fast, explosive and prepared for an event that will not only test their technical skill and physical preparation, but also their ability to be powerful over a period of time.

Long Drive Competitors on the other hand, are more like your 100 meter sprinters.  They need to be all the same things as the 200-400 meter runners, but more so focused on the power and explosiveness and not so much on making it last for very long.   Because of this, their training is focused similarly with longer rest periods at times to allow for more explosive recover. They focus on being maximally powerful and explosive without as much concern for having to do it over and over again for hundreds of thousands of swings.

While they don’t take as many swings, each swing they take is a maximal all out effort to obliterate that little while ball on the tee as far into the stratosphere as they can…and hopefully on the grid.

So the next time you talk about how impressive the guys and girls on Tour are and how far they hit the ball, don’t forget to bring up the competitors on the World Long Drive.