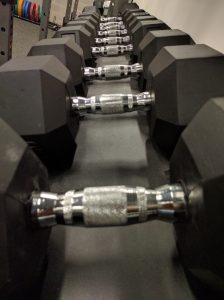 Over the past few months, I have noticed, very slowly, that one of our athletes has been slowing down.  Just a tick, and not every time we train. Because he is often with another coach, I sometimes see him only once a week. This athlete has been training with us for a while and has always been a real “get after it” kind of person, always taking the hard route and full throttle from beginning to end.  I had initially chalked up the slowing down to perhaps just being tired in the short term, as it was very subtle. Then I realized what was going on.

We had two med balls sitting side by side during a conditioning workout, one light and one heavy because this was a mixed ability group.  He opted for the lighter ball without being directed. That was when it hit me…cumulative fatigue.  After some investigation, we concluded there had not been a week off in months. I immediately called a rest week for the following week; no anaerobic work, no heavy weight, nothing taxing on the body or the nervous system.  Perhaps it was school, work, kids, homework, stress about finals, or a big project for the boss.  The result over time was diminished performance.

We have since decided to ease back into things after the rest week. He will probably not return to full speed for a few more weeks.  A tired body can take more than one week to recover.

The point here is to contain your athletes, don’t just push them.
There is the athlete who will fight through pain without saying a word.  These are tough.  You need to read body language and really be attentive because they will never tell you something is wrong, and a little soreness can turn into a tendinopathy in three shakes of a lamb’s tail. Now you have a bigger problem.  Don’t allow little aches and pains to fester into chronic injuries. If someone is in pain, figure out why and address it intelligently.
There is a big gap between a wimp and a hero. It is the coach’s job to spot where athletes are on the spectrum because it isn’t always obvious.
We have a fiduciary responsibility as coaches to do what is right, and not necessarily what is wanted, even by the athlete.  When someone is showing signs of fatigue, dig in, especially if it is over any significant time period.  Our view is from 30,000 feet, not from a second-floor balcony. Pushing someone harder when they are in that state is the wrong route.  It isn’t easy to spot. You need to know your athletes. Because some may just be tired from staying up late watching movies the night before (no mercy in that case).  But when something seems off with an athlete you really know, go below the surface.  It’s your duty.
Train smart, not just hard.
Zac Hales
TPI-FP3
NASM-CPT
USA Weightlifting Sport Performance Coach
Post Views: 1,255
Category: ArticlesBy [email protected]November 17, 2016Leave a comment
Tags: performance